Sarah Burton’s tiny grouping awed with its beauty and the craft on display. It also whetted the appetite for what commercial glories the showroom may hold. 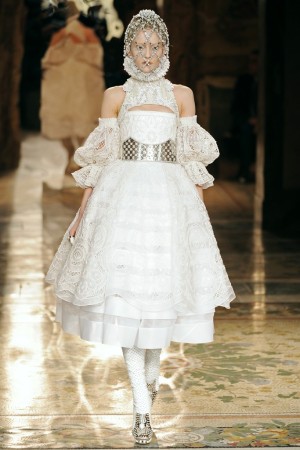 Hallelujah! That word applies not just to the ecclesiastical motif of Sarah Burton’s exquisite Alexander McQueen presentation, but to what a designer can do with 10 looks and a thought in her head.

Burton decided early on to forgo a full-scale show in favor of an intimate presentation due to the recent birth of her twins. She showed in an ornate salon of the Opéra Comique, her high-shine, modernist cube seating in serene contrast to the room’s froufrou murals and gilding. As for her theme, Burton is either prescient or fashion’s fastest worker, as who didn’t connect her theme, the sartorial trappings of “the high church,” to the papal conclave? Her show notes referenced “from communion gowns to cardinals’ robes.” (And with good reason. Have you ever noticed the laces on view during a procession of the cardinals? Amazing.) In five pairs of related looks, she presented a lavish feast in which pristine communicants in exquisite organdy lace gave way to sensual Swiss Guards and a twosome whose pearl-encrusted, cutaway habits suggested they were sent to the nunnery to atone for their sexual sins, (said atonement a work in progress, from the looks of things). She finished with a white-and-gold homage to the Virgin Queen, which referenced both Elizabeth I and various religious iconography.

Burton’s tiny grouping awed with its beauty and the craft on display. It also whetted the appetite for what commercial glories the showroom may hold. Almost at the end of a seemingly endless season, countless other designers could take a lesson.