The Art nouveau movement — both Vienna's Secessionist and London's Arts and Crafts — provided a lovely graphic for Andrew Gn. 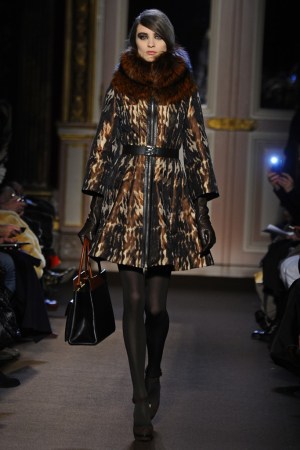 The Art Nouveau movement — both Vienna’s Secessionist and London’s Arts and Crafts — provided a lovely graphic for Andrew Gn, who worked the elegant lines of artists Koloman Moser and Aubrey Beardsley with a modern touch for fall.

The designer took the theme on with a subtle architectural hand and a great deal of surface detail. Appliquéd black velvet cut in swirly forms and jet bead embellishments were used on sophisticated coats, dresses and several blouses, including a blue kimono-sleeved one with adornments that loosely resembled the lines of a Moser chair.

The show could have used a tighter edit with less variations on the same few silhouettes, but the gold motifs — faint butterfly lace appliqués, a mosaic of feathers — enhanced the mood.

Gn’s new collection of leather bags also worked well with the lineup. The structured pieces with semiprecious stones, including amethyst and tiger eyes, will give his social fan club another reason to shop.