Still loyal to minimal black and white (unless you count silver hardware as a color) and maximal sex appeal, the new ingredient was structure. 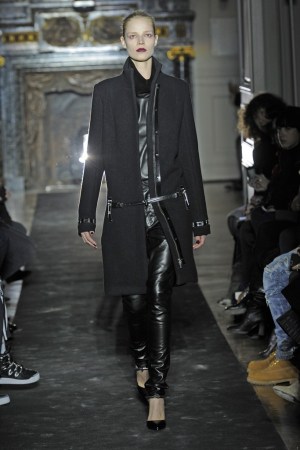 Still loyal to minimal black and white (unless you count silver hardware as a color) and maximal sex appeal, the new ingredient in Anthony Vaccarello’s formula for fall was structure. By tightening up his silhouette, working his mannish daywear and skimpy dresses in trim tailoring, the designer made the look more modest than it’s been in the past — even when it came to microscopic minidresses that seemed sliced off for an asymmetrical hem and spliced with panels of grommet mesh. The precision of cut and methodical use of hardware, including some seriously sharp spikes that trimmed leather minis and were pierced through low-slung leather belts, had a polishing effect on an otherwise predictable lineup. Vaccarello can do racy clothes in his sleep, but as even the hottest couples know, once it becomes routine, it loses steam.