Alexander Wang researched well, and, at least this first time out, created a look distinct from that of his signature label. 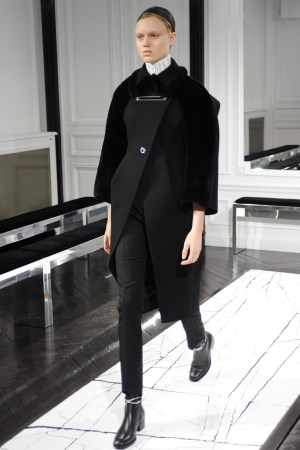 “People are like, ‘How are you going to do the next one? Aren’t you so drained?’” Wang said, repeating a question he’s heard often since presenting his fall collection in New York. “I’m just like, ‘No, I’m just so excited, you know!’”

And why not? Fashion’s latest boy-wonder appointment has on his side youth, a well of natural enthusiasm and the thrill inevitable in a new adventure, an all-eyes-on-him one at that. Balenciaga’s recently installed creative director spoke to WWD Wednesday morning, the day before presenting his debut collection for the house, in which he began to etch the “landscape” of his Balenciaga. If, as the house publicist Lionel Vermeil maintained, this was Wang’s prologue, those who expect to follow the story should note two clear points: Wang researched well, and, at least this first time out, created a look for Balenciaga distinct from that of his signature label.

On the second point, while the Alexander Wang aesthetic is very much of the street with the inherent casualness thus suggested, for Balenciaga, the designer went decidedly more dressed up. These clothes were of the chic Power Lady sort, pulled-together and polished with an attitude of sensual authority and clear nods to midcentury couture.

But then, Wang started from the premise of “really wanting to pay homage to Cristóbal. I went back and, you know, started with the archives and revisiting the clothes and what I thought was integral to the DNA.”

That translated into a mostly black lineup cut with plenty of curvature, in rounded shoulders, sac backs and looks from Balenciaga’s apron wedding dresses; Wang turned the concept around, translating the apron shape into cutaway jackets. Not all such moves were intentionally derivative. The first looks out, including a sturdy black coat with fur sleeves, featured rounded back yokes arrived at accidentally during a fitting. “We were pinning the fabric back and I loved the drape, so we worked it into the sleeve,” Wang said.

He lightened the lineup with flashes of white in shirts worn with lean skirts and some terrific knits with a crackled texture inspired by marble, a theme repeated more obviously in swirling prints and velvet burnouts, and in short, puffed-up mink jackets that looked terrific over skinny pants.

Perhaps most surprising, and happily so, this collection didn’t hit you in the face with the overt commercial mandate that many have assumed was behind Wang’s appointment; rather it felt smart, accomplished and well designed. As for its retro quotient — probably inevitable, given the circumstances — Wang delivered it deftly and well. But based on his body of work in New York, it’s hard to imagine him embracing obvious retro over the long haul; he may feel compelled to inject a grittier currency going forward. Nor did the show offer the heady thrill of Nicolas Ghesquière’s best work, the brilliance of which brought the house from decades of dormancy back into the forefront of fashion until the designer’s tenure there started to sour. But for a collection not a minute more than two months in the making from first glimmer to runway, it made for an impressive start.

Certainly the pressures were considerable for several reasons, including the reputation of his predecessor as one of current fashion’s greatest talents. “Of course, [Ghesquière’s work] is a big part of the brand, of where it’s been. But in terms of the actual pieces that I looked at, I didn’t look at any of Nicolas’,” Wang said. He did identify clear points of connection when examining the archives. “I didn’t even realize certain pieces were originally from Cristóbal,” Wang noted. “Going through [archival] pieces I was like, ‘Wow, look at this seam’ or this back or something like that. That’s where it originated. For me, someone from my generation would probably not have put the two and two together. You would probably know [the element of design as being] from Nicolas. Going back to that [the discovery], it was really a big, kind of inspirational moment for me.”

Wang savored his research, from which he distilled his take on the house founder’s ethos, which he described as, “Cristóbal’s belief in having the body feel very free and always having movement.” Wang was taken with how different Balenciaga’s clothes looked from various angles. “[He created] that interaction [with the body]; you have the bell shape, the satellite fit and there was a different silhouette from every angle. So we started there, with all the clothes having this swinging movement, things that felt very dynamic.”

Wang has delighted as well in the resources and technologies available to him, exhibited in, for example, the material he used for the pants he paired with his furs: velvet bonded to foam and then laser-cut and reembroidered.

A levelheaded sort who in a few short years has built his namesake house into a successful brand with global distribution, Wang transported his cool-headed approach to Paris. Asked about essential aesthetic delineation between Alexander Wang and Balenciaga, he admits to a process that is incomplete but necessary. “I can’t say that I have it all figured out,” he said. “On my iPhone I keep lists and lists — just thoughts and key words of things I have to do to separate the two worlds. I think in time it will become more clear. Yes, definitely, it was something that is very important for me to differentiate.”

He is already crystal clear on one point: His role as creative director of Balenciaga is to fuel the commercial ship. He picks one of his runway bags — a small, structured shape with a half-moon top-handle and metal feet “that look like ice-skating shoes” and follows immediately with, “and here’s the commercial version.” (It has a shoulder strap.) His runway shoes ranged from flats to stilettos cut to show toe cleavage.

“Right off the bat, it wasn’t like my first meetings were just on designing the collection,” Wang explained. He recalled a discussion with chief executive officer Isabelle Guichot “to kind of understand what’s very important for business and where we needed to go…I was meeting with the merchandising teams; I was meeting the handbags teams, the commercial teams and all of that.”

“All of that” seems not to unnerve him. Nor does his sudden stewardship of one of the most revered creative legacies in fashion. “I would be lying if I said I wasn’t [intimidated initially],” Wang acknowledged. “I mean, those were the hardest weeks of my life — going into this before it was announced.

“Then at a certain point it was just like, you know what? You have to stop thinking about it and focus on the work,” he continued. “You can’t think about it as fear. You have to think about it as a choice. And that is something that is just going to take you and drive you. At that point I just blocked it out of my mind.”