For her third collection, the designer openly claimed her devotion to Madame Grès with this dress-centric lineup. 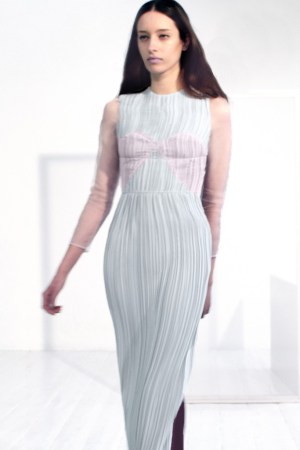 This season Brazilian designer Barbara Casasola showed in Paris, fittingly at the Brazilian Embassy. For her third collection, the designer openly claimed her devotion to Madame Grès with this dress-centric lineup. The busts of long and lean Fortuny-style pleated looks were overstitched to mimic the iconic intricate drape construction of the cult designers. “Madame Grès’ work, if fluid in aspect, was very constructed and stiff,” said Casasola. “I wanted to do a light version of this more in tune with our modern world.”