The designer pointed to medieval illumination — decorated scriptures, to be exact — and last century’s Art Brut movement as the starting point for fall. 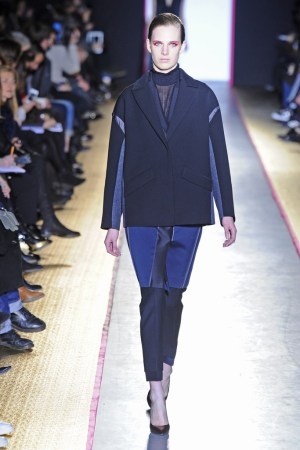 Before the show, Cédric Charlier pointed to medieval illumination — decorated scriptures, to be exact — and last century’s Art Brut movement as the starting point for fall. It was an intriguing mix, which Charlier executed with mixed results.

He translated the theme via an elaborate fantasy print, for instance, placed on a shift dress and a cumbersome top with skirt. A green abstract scribble motif on a form-fitted halter dress was more appealing.

The Belgian designer’s solid pieces were stronger — particularly the cool knit sweaters and coats, including one that looked graphically pieced together in two shades of blue; another chic number with a roomy fit and rounded shoulders subtly read cocoon.

The designer also continued his love affair with fluorescent colors, and while acidic yellows and neon pinks are not for everyone, they gave the show a necessary jolt.