Phoebe Philo took a decidedly feminine turn without sacrificing a bit of the no-nonsense chic that has made her such a star. 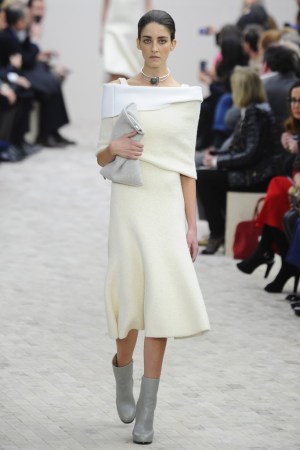 In the Celine collection she showed on Sunday, Phoebe Philo took a decidedly feminine turn without sacrificing a bit of the no-nonsense chic that has made her such a star. It was as if Philo imagined a wallflower with a fashion fixation who beamed herself into a world where Nineties minimalism infiltrated a chichi Forties secretarial pool. Fabulous? And then some. On the power side: the loose, geometric shapes Philo employed for anything that fell from the shoulders (coats, tops, dresses) and winter-weight woolens that were utterly plainspoken, albeit elegantly so. These were countered by girly conservative flirt skirts that hugged the fanny (almost) and flared out over the knees. Unifying the two were wide, cocoonlike stoles and a palette of winter standard gray and black softened by pretty pales — peach, pink, ivory.

The looks were as unfettered as a dropped lapel, one-button coat over a collarless dress and a boxy, wide-sleeve tunic with a skirt. Philo seldom broke the plane of visual calm by mixing colors (save ivory and white or soothing tiers: a butter-yellow cutaway cape over sweater and skirt in two shades of gray. That is, until she upped the pep factor with competing tablecloth plaids — bright blue over red — for a top and skirt. Yet for all the glorious serenity, her cuts were not all as simple as they appeared; the horizontal seams of two A-line shifts opened into huge pockets, and some sleeveless looks had big faux sleeve appendages that knotted in front. It all looked chic, beautiful and effortless to wear (though certainly not to create), a perfect continuance of Philo’s woman-to-woman dialogue.

Finishing it off — no furry footwear folly here. Rather, Philo offered two options: short, manageable walking boots and second-skin thigh-high boots that looked like leather hose on a heel. As for the bags: soft rectangles in both leather and the same woolen fabrics as the clothes, which the models held tight to their torsos. “Forget the clutch,” one journalist said while leaving the show. “Those were hug bags.” Well said. There’s nothing like a great bag to warm a girl’s heart.