Clare Waight Keller framed her fall collection with the idea of “that transition from when you’re young to being a woman.” 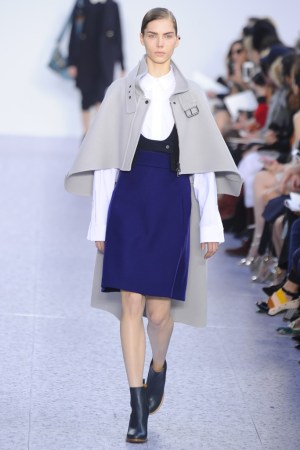 Let’s assume that the average designer customer is a grown woman and that the average grown woman doesn’t want to dress like a little girl. That presents a challenge to the designer of a label such as Chloé, a house ruled by the sporty-versus-sweet-innocence dichotomy, wherein white ruffles and apron dresses are part of the DNA.

Clare Waight Keller has a good sense of how to navigate the material. She framed her fall collection with the idea of “that transition from when you’re young to being a woman,” she said backstage. Show notes went on to suggest a collegiate attitude, naming “bare legs, dorm rooms, bike sheds, flirting,” but the clothes were adult-driven.

Waight Keller kept a school-days spirit about the lineup, showing pinafore dresses with straps that mimicked backpacks and a plethora of great capes in an inky shade of blue, yet the sharp minimalist cuts tailored the look for a mature, stylish audience.

She interspersed utilitarian spareness — a plain blue jumpsuit, for example — with the girlish sportif, as in a cute polka dot tulle T-shirt and kicky skirt. There were elevated basics, such as the ultracrisp, brilliant-white shirts with oversize sleeves. Fabrics including wool felt, precise tweed and shearling were luxurious, and the accent colors of seafoam, chalky blue and red felt classically rich.

Some of the strongest moments came in Waight Keller’s boyish approach to “cocktail,” showing extra-large graphic stripes on a V-neck silk sweatshirt and a slim white skirt. The overtly feminine moments were tightly edited and all the more impactful at the very end, when a plain shift was veiled in metal lattice work and jeweled outer layer, and two tailored tops exploded into dotted tulle skirts.