While still respecting the codes of the house, for fall Simons flexed many of his own signatures more obviously than in his debut collection. 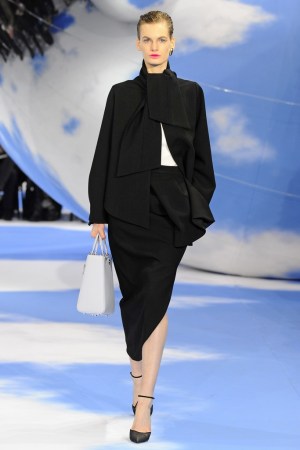 Raf Simons is showing more of himself at Dior, and the view is splendid. While still respecting the codes of the house, for fall Simons flexed many of his own signatures more obviously than in his debut collection — a move essential in the evolution of Dior as a storied house with plenty to say to the modern consumer. For starters, his set — countless enormous mirrored spheres reflecting the floor, painted sky blue with fluffy white clouds — recalled the spring 1999 men’s show Simons presented in front of the sphere-shaped La Geode at the “Cité des Sciences et de l’Industrie.” This time around, the space enveloped the audience in a dreamlike world that was a little surrealist, a little weird and quite mesmerizing.

It also had an arty appeal, which was key. Simons based the collection on similarities he identified between Christian Dior and himself, specifically their mutual interest in art and their retro inclinations, which Simons called “a natural falling in love” with a past era. “In [Dior’s] case, it was the Belle Epoque and in my case, midcentury,” he said backstage before the show, sitting in one of the navy velvet Jean Royère wing chairs that outfitted his elegant makeshift receiving room. “It’s not specifically about the era; it’s about the process of allowing for yourself the freedom to go back to the period.” This led to the notion of memories and approaching a collection as one might a scrapbook.

The ruse proved both beautiful and savvy, allowing Simons to present unlike concepts with cohesion. The lack of grand eveningwear was noticeable; for this season at least, that’s the domain of couture alone. Here, Simons kept his focus squarely on the accessible side of chic. His lineup swung between elegant tailoring and looks with less obvious construction. When delivering the former, he made clear archival references, particularly with big, swingy coats and jackets, but dared to temper the homage for the sake of currency. Case in point: The denim pantsuit with a jacket that whispered rather than screamed “Bar.” There were gorgeous coats, some with major flourish — a dramatic self-scarf at the neck or big artfully constructed bow in back — and others, far more low key. A stunning mink clutch coat felt very Dior — even as the mental bells went off recalling the designer’s last collection for Jil Sander.

As for the “memory dresses,” they were offbeat knockouts: Twenties-inspired shapes etched with seemingly random motifs from the history of Dior as well as redos of early drawings by Andy Warhol, done under agreement with the artist’s foundation. One beauty, an airy strapless, featured Warhol’s “Unidentified Female,” a faintly drawn portrait, adorned with vibrant flowers. For less ethereal types, how about the chunky cable knit reimagined as a chichi skirt with big, fluffy peplum?

Among Simons’ most obvious homage: a redux of the famous 1949 Miss Dior dress, a demure party frock covered in embroidered flowers. Only Simons cast his take all in black leather. A little reverence wrapped in edge — Dior’s future looks as bright as the vibrant blue sky behind those reflected pristine clouds.