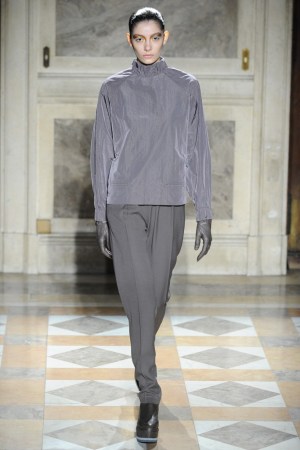 Doing away with his more nomadic proclivities, Damir Doma took a futuristic turn for fall with a collection informed by “neo-corporate workwear” — think modern-day office clothes.

“She is earning her own money and living in two or three places,” Doma elaborated backstage before the show. “She is confident and strong.”

Yet the designer’s view of the power executive often felt cumbersome. A gray nylon top was gathered and ruched at the neck and teamed with mannish pants, while a zipper was placed unflatteringly across the front of a dress with raglan sleeves. Stacked rubber-soled metallic creepers and Chelsea boots added to the heavy vibe.

More interesting were the details. Doma incorporated several new textures such as an interesting wool jacquard that mimicked pinstripes for a mannish, boardroom feel. His wool perforations worked best when combined with other materials, like the houndstooth bouclé on the sleeves of a top.