The designer referenced an “urban attitude” to describe his fall collection. 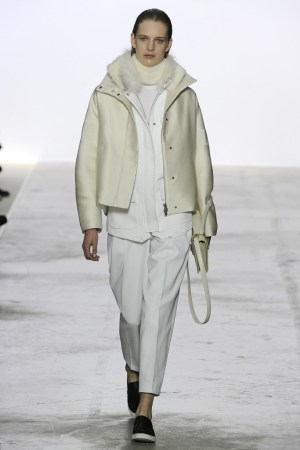 Backstage after his show, Giambattista Valli referenced an “urban attitude” to describe his fall collection. He wasn’t talking about the mean streets of an anonymous metropolis, but, rather, the refined streak of a sophisticated, worldly woman — the type he has targeted since launching his label.

Valli largely stuck to a black and white palette, often showing different shades of the latter in one look, occasionally infusing flashes of lipstick red and blush pink. Many of his oversize white parkas had a utilitarian feel and were teamed with soft ivory dresses draped with a romantic hand. “It’s this idea of girls meeting boys,” he said, “and melting together the two wardrobes.” The flat, white-soled loafers that punctuated many of the looks nicely illustrated that idea.

Valli also demonstrated a strong sense of control with his embellishments, placing just the right sprinkling of crystal clusters on coats and dresses. It’s a look that should be opulent, but in his hands it was never ostentatious. His first handbag, which he introduced on the runway and named the Valli, had the same effect: The structured top-handle design had a ladylike elegance that would appeal to women like Inès de la Fressange, Farida Khelfa, Elettra Wiedemann and the gaggle of Brandolinis — all of whom sat in his front row.