Riccardo Tisci staged a show to remember Sunday night, upping his production to theater quality with a major front row and a headlining act. 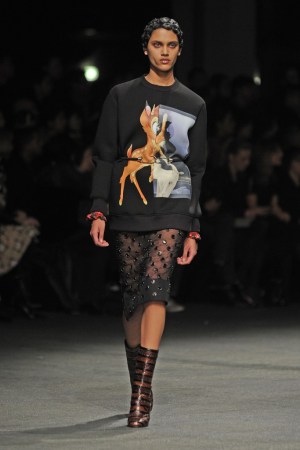 Outstanding. Riccardo Tisci staged a show to remember Sunday night, upping his production to theater quality with a major front row and a headlining act. Antony Hegarty, the transgendered English singer known for his hauntingly symphonic voice, could not have been more perfectly chosen to perform during the show, setting the mood of strange beauty that resonated on every level. It was atmospheric, emotional and full of incredible fashion.

The notes rationed out by front of house p.r. described Tisci’s thesis as “the strength of gypsies meets the romanticism of a Victorian feeling.” Gypsies and Victorians are hardly cut from the same cloth, so it was amazing to see Tisci combine the influences in a lyrical way, representative of both yet literal to neither. But before the bounty of gorgeous paisleys and rose prints worked on long sheer skirts interrupted ruffles and lace, there was Bambi.

The collection opened with a direct reference to Tisci’s own body of a work: a black lace sweatshirt, one of his signature motifs, bearing an illustrated likeness of Disney’s favorite deer spliced with what looked like a classical painting. It was cinched with a red braided leather belt with two hooks for clasps and worn over a sheer, rose-printed silk skirt decorated with what looked like old-fashioned wax letter stamps. The weirdly graceful mix of streetwise aggression and classic gentility continued throughout, on molded biker jackets that came in solid black and saturated florals, paired with slim sheer skirts.

Tisci mashed up grungy plaid and rose print on shirts. He trimmed long gypsy skirts in zippers and sliced them up the thigh. Basques that were similar to puffer jackets were affixed around the waists of many looks emphasizing the waist. This reinforced the romantic, womanly nature of the collection without diluting its edge.

A few of the most stunning looks came at the end: boyfriend sweaters, some studded with shiny polka dots, worn over long fluted skirts. Natalia Vodianova was the last exit out. Her legs, taut and toned from a half-marathon run the morning of the show, were visible through the mostly sheer tulle skirt trimmed at the hem in sequined roses — a new and truly daring proposition for evening.