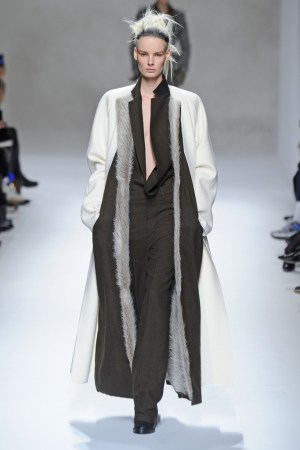 He’s got guts. There’s something overtly against the grain about Haider Ackermann’s approach to fashion. These days, most designers/houses/brands want to telegraph if not always a happy picture, then one whose editorial melancholy comes wrapped in understandable prettiness — the better to fuel the bag sales.

Not so Ackermann, whose post-show explanation of intent was as intriguing as the collection he’d just shown. “I’m surrounded by so many strong women, but there’s always a fragility inside and I wanted to explore that,” Ackermann said, while noting, “The older one gets, the more fragility there is.” He might as well have put it, “Hey, there, ladies who can afford expensive clothes, most of you are getting up there!” Not quite “Break a hip yet?” but not exactly fashion’s typical calling card, either. Rather, a realistic impression of those strong women — not stylist-dressed ingenues or imaginary, rich under-30s who look like Karlie Kloss, but women who inspire Ackermann, season after season.

His real-life muses are not of the runway-ruse power-woman variety, all slick-lipped, strong-shouldered perfection. Nor do they expose their fragility typically; fashion-wise at least, the word implies diaphanous, ethereal, floaty, 180-degrees away from this collection. A dark mood that felt almost post-Armageddon settled over the runway as the models emerged from an increasingly dense mist, sheltered from the oncoming threat — outside force or the aforementioned fragility? — beneath layer upon layer of mannish tweeds, woolen jacquards, olive drab, leather and rugged nutria. Coat over coat over suit; jacket over jacket over wool trousers; thick tunic twisted, folded and tacked into place with the artfulness that has become Ackermann’s hallmark. Abundant, yes, and not always easy, particularly the heavy tweed pants.

But even with all the layers and draping, Ackermann simplified things, relative to previous seasons, so that the clothes looked as if a knowledgeable designer customer could pull looks together on her own. Ackermann even succumbed to a single minimal moment: a provocative gray velvet column, his lone acknowledgment of serious evening. Either way, a supreme elegance defined this beautiful collection.