Hussein Chalayan opened his fall show with basics, not with the proverbial twist but an elevated edge. 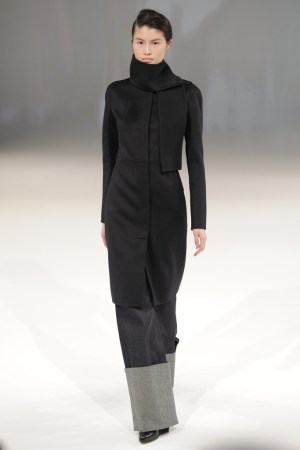 A black jacket, white shirt and jeans. Hussein Chalayan opened his fall show with basics, not with the proverbial twist but an elevated edge. Variations on this modern uniform included wide-leg, dark-washed denim trousers with precise oversize cuffs, sporty coats with zipper and fold details and, well, some pretty plain shirts. Yet each version of the everyday look was chic and wearable.

There were more relative classics — elegantly tailored coats and a simple black peplum top — to come in the show, which was a dichotomy between understated sportswear and the arty conceptual stuff that Chalayan can’t resist. Dresses came in melting painterly prints. Some were solid but for a folded back panel that revealed a different color or a print.

Then there were the nifty convertible pieces: A model walked out in a short dress with what looked like papier-mâché squares plastered all over it, tugged at the neckline and — voilà — it fell into a long, draped black gown. The two-for-one styles were improbably commercial, and can double as a party trick when conversation stalls during cocktail hour.