Pre-Raphaelite art, most notably Millais’ famous “Ophelia” painting, got some play at the fall show. 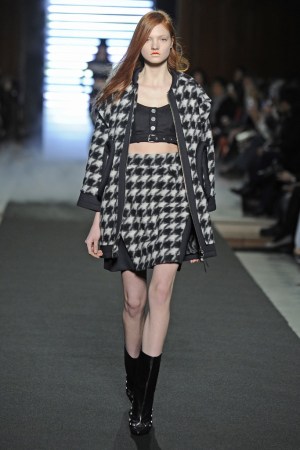 Pre-Raphaelite art, most notably Millais’ famous “Ophelia” painting, got some play at JC de Castelbajac for fall. Designer Jean-Charles de Castelbajac used the visual as a print on a skirt teamed with a linear-cut white top, and a jacket and pleated floor-length skirt combo.

Rather than looking overly whimsical — something Castelbajac is known for — these clothes were executed with just the right amount of charm. He worked his signature blanket looks in plaid, including a strapless black and white dress with a fringed self-scarf.

There were still some fanciful effects, like the jacquard dress in a fox motif, featuring the animal’s oversize face on the upper torso, its pointy ears sticking out above the shoulders. It was strange, but at the same time funny.