This collection was a step in the right direction for the designer, who is looking to build a viable ready-to wear business with the backing of Puig Group. 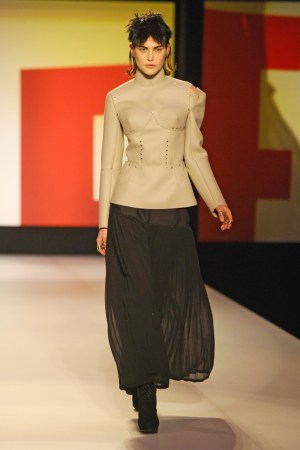 Last season’s campy homage to pop icons (and, almost by default, drag queens) gave Jean Paul Gaultier two choices for fall: vamp it up some more or take a subtler approach. He opted for the latter, relatively speaking, with some real clothes that, while still a work a progress, demonstrated the designer’s willingness to evolve from those over-the-top theatrical ways.

The collection went in many different directions. Gaultier started off with another interpretation of his cone bra, reinvented here as studded long-sleeved tops that incorporated his famous bustier silhouette. Softer than the original, the look was still a bit severe, but Gaultier balanced it with a few lovely, languid skirts. He also showed some strong coats — a chic tailored white one had large lapels that, over a fluid floor-length mauve dress with a pretty plissé skirt, felt refined and luxurious in a Parisian way. For another grouping, Gaultier featured shadow prints on dresses and in fur patterns, a play on his set made up of screen walls through which models’ shadows could be seen backstage.

The lineup began to unravel with the patchworks — a mash-up of furs, fabrics and surface details like ribbon fringe — which, even when worked into a body-conscious dress worn by Karlie Kloss, weren’t always flattering.
Those aside, this collection was a step in the right direction for Gaultier, who is looking to build a viable ready-to wear business with the backing of Puig Group.