The show kicked off with promise — sculpted jackets, coats and shirts, each hand-painted with a yellow or pink stripe. 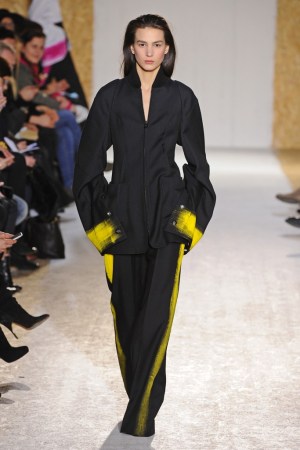 “The show is a rally.” So stated the Maison Martin Margiela press notes, but they never specified what the rally was for. Like the founding designer who has since left, it remained an enigma. The fall collection was equally puzzling. The design team delivered a disjointed lineup that, while filled with some strong pieces, lacked the innovative spirit that had earned the house a cultlike following in the first place.

The show kicked off with promise — sculpted jackets, coats and shirts, each hand-painted with a yellow or pink stripe. The look was graphic and cool, underscored by exaggerated, unbuttoned cuffs. There were also some appealing knits, particularly the ribbed sweater with a crushed velvet panel across the front and on the sleeves. But the mesh tops randomly embroidered with multicolored wool thread and layered over white shirts leaned toward messy. Floor-length dresses were made from panels that resembled advertising banners. Draped and tweaked, these unflattering numbers had so much going on that any intended message was obscured.