The look for fall seemed rooted in conservative, early 1900s nostalgia, on which Miuccia Prada riffed with deft mix of serious fashion and cartoon madness. 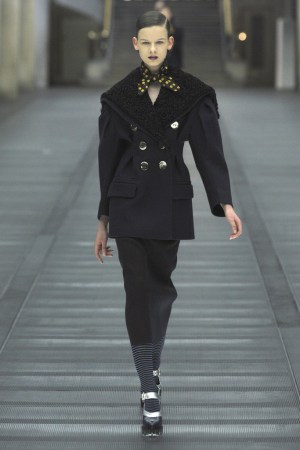 Miuccia Prada is typically less outspoken about the fashion fatigue induced by producing two major collections per season than, say, her pal Marc Jacobs, who has taken to wearing his pajamas around town — at Miu Miu, he was still sporting the ones in which he took his Vuitton bow. But even Prada is not immune to the grind. When prompted for the requisite inspiration sound bite after the show, the designer began by saying that her phenomenal Prada collection ate into her mental space for Miu Miu. “After the last show, having worked so much for a month and a half [on Prada], I just wanted the visual,” she said. “Something sporty but it had to become frivolous and romantic at the end. The end is completely another story, but I didn’t have time to analyze it. It’s just instinct and what you see.”

If she was pressed for time or drained of creative energy, it didn’t show on the runway, where impulse drove her to a great, new-for-Miu Miu silhouette of long coats and sweaters worn over longer skirts that revealed the ankle. The look seemed rooted in conservative, early 1900s nostalgia, on which Prada riffed with a deft mix of serious fashion and cartoon madness. One ensemble — a fitted black jacket with big round buttons and orange astrakhan collar, worn over a polka-dot skirt with an orange ostrich carpet bag and silver Mary Janes — brought to mind Mary Poppins.

The outerwear-skirt pairings, which went on to include terrific clingy ribbed knits zipped over striped skirts in combinations of red and black or yellow and black, triggered a memory of Jean Paul Gaultier in the Eighties. But there was plenty of Prada’s own history, too, in the sporty jackets and belted bodices cut out of quilted navy-blue nylon with pronounced zippers, big pockets and ribbed knit cuffs and hems. The adorably clownish motifs that were used sparingly as styling effects at first, escalated to full looks by the finale of chicly cut coats in pink, yellow and baby blue.