Not to be outdone in a blockbuster outerwear season, the brand and its designer Giambattista Valli staged an Arctic odyssey to remember. 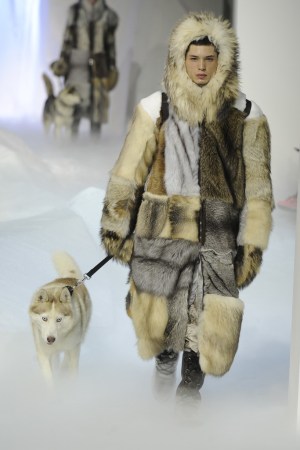 Not to be outdone in a blockbuster outerwear season, Moncler Gamme Rouge and its designer Giambattista Valli staged an Arctic odyssey to remember. The over-the-top show had it all: an iceberg backdrop, a fake blizzard and mountain climbers landing on the snowdrift runway via a zip line. There were Siberian huskies, too. Several escaped their leashes, giving everyone in the front row a chance to pet their luscious fur as they skulked backstage.

Fur was a main feature in the collection. Various long-haired varieties mingled on hefty Nanook of the North parkas for men and women, while others appeared on the hem, sleeves or shoulders of puffer jackets printed to resemble sealskin.

This being Moncler’s most upscale range (it launched in 2006), Valli applied intricate, snowflakelike beading to Aran sweaters and added crystals to long parkas worked in winter scene motifs in a gorgeous range of winter blues.

For the finale, models came out snuggled next to men costumed in polar bear suits. The soundtrack blared The Beach Boys’ Christmas ditty “Little Saint Nick.”