Only in their fourth season, sisters Priscilla and Debora Royer impressed with maturity. 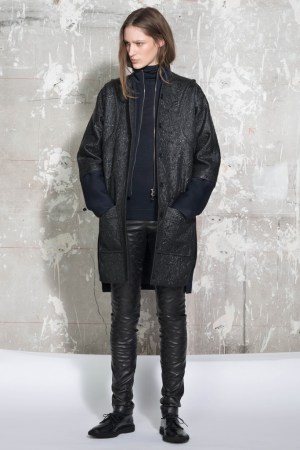 Only in their fourth season, sisters Priscilla and Debora Royer impressed with maturity. Presenting about 40 pieces, a slightly larger collection than in the past, the duo married an assortment of dense textures, including a unique fabric that looked intriguing on varsity-style jackets and dresses.

Fabric mixes were particularly crisp on a cute dress: its front worked in an embossed leather-like fabric the designers developed themselves, with transparent mousseline shoulders and a patch of navy wool in the back. Channeling English workmen clothes from the beginning of the 20th century, these pieces were built on sober tone-on-tone color combinations of black, brown and navy with touches of white. Raw finishes were worked on butter-soft flannel sweaters, graphic stitches gave leather pants a feminine touch, while a pair of loose-cut pants with a slight apron detail at the waist had a playful vibe. Overall, the lineup oozed a cool sensibility.