Now showing in Paris for several seasons, the designer felt it was about time to infuse his aesthetic with a stronger Parisian flair. 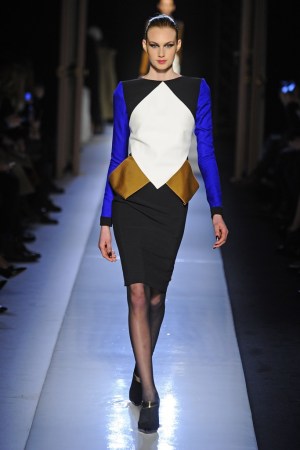 Now showing in Paris for several seasons after stints in New York and London, Roland Mouret felt it was about time to infuse his aesthetic with a stronger Parisian flair. What’s not to love about the idea — the women in this city, after all, are known for their effortless chic — but Mouret executed it with mixed results.

As a reference, he looked to Catherine Deneuve’s vampire turn in 1983’s “The Hunger,” “the nasty Deneuve, not just the nice one,” the designer said before the show. The inspiration gave the clothes a distinct, sometimes too literal Eighties vibe. Sharp shoulders topped strong tailored pieces; bold asymmetric color blocks in blue and brown or leopard patterns weren’t always flattering, and surface tweaks and folds showed off the designer’s signature origami skills. Throughout, it was evident that Mouret pushed himself to evolve from his skin-tight, waist-centric silhouette with clothes that moved along the body less severely than usual.

Stronger were the accessories: bold, choker-style collars and heels with detachable fabric sleeves that gave a bootlike appearance. Fall also marked the launch of Mouret’s handbags, named after Paris icons like Le Sept, Monceau and Hugo (as in Victor). The structured shapes with gold chains best exuded that Parisian chic Mouret was going for.