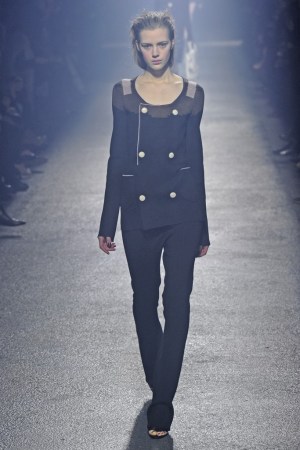 With the house’s founder looking on, Geraldo da Conceicao showed his debut collection for Sonia Rykiel, in the brand’s first runway outing under new owners Fung Brands Ltd. Da Conceicao kicked off with Rykiel’s signature knits, here in the shape of structured suits that paired slim-fitting jackets featuring graphic necklines with narrow skirts or slightly drop-crotch pants. That paved the way for a more experimental approach, with textures such as wool fringe, beaver pelts and fluffy angora used to create sporty silhouettes accentuated by oversize pockets. Though he dabbled with pastels, including baby blue and bubblegum pink, da Conceicao was most convincing when he stuck to black — especially the terrific loosely constructed leather dresses.

With this dynamic, if at times uneven, effort, the designer was clearly seeking a balance between the Rykiel DNA and his own harder-edged aesthetic. The two merged admirably in a trio of simple black dresses but the final parade of models, all clad in sweaters and droopy flared trousers, felt like a forced reference to Rykiel’s traditional group finales — but without her devil-may-care Parisian charm.