The designer presented a smart-and-studied lineup of wearable looks that had her easy-chic signature written all over them. 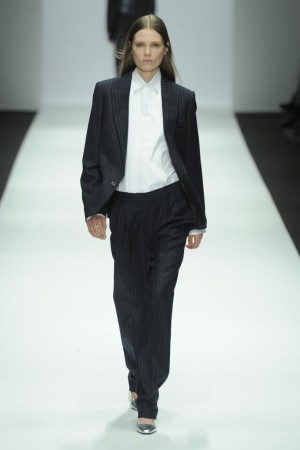 The best thing about Vanessa Bruno is that she follows her instincts rather than trends. For fall, that resulted in a smart-and-studied lineup of wearable looks that had Bruno’s easy-chic signature written all over them.

Skirts and dresses with metal ring inserts and mod coats harkened back to the Sixties — Catherine Deneuve in “Belle du Jour” was the designer’s reference point. “But I didn’t want it to be too girly,” she said backstage. So she toughened things up with a series of slouchy woolen pants that had an androgynous, Katharine Hepburn charm and were matched with glittery tops or strict men’s shirts and ties.

A graphic touch was added via patches of sparkly black fabric on wool coats, billowy skirts and dresses, while subtle embroideries were used on delicately layered dresses and plissé skirts, which, when worn under elongated blazers, looked crisp and youthful.