The lineup drew influences from “the four corners,” as Westwood explained, with Medieval Europe in the Highlands and the Arab region taking the lead. 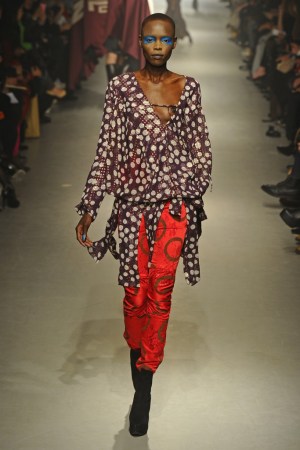 Vivienne Westwood opened her fall show with a bunch of eco-warriors in tartan capes that had “Climate Revolution” printed across them, making a point of the designer’s serious environmental activism. The lineup then drew influences from “the four corners,” as Westwood explained, with Medieval Europe in the Highlands and the Arab region taking the lead. Scottish quilts translated into dresses with slit panels instead of pleats, while a series of beautifully embroidered pieces evoked the sartorial luxuriance of Moroccan kaftans.

A series of cream silky dresses — some wrapped, others belted, all with spiked shoulders — injected a softer tone into the collection, which, this season, included more commercially friendly pieces than usual. Westwood’s outerwear was particularly strong, including a cozy gray poncho-coat hybrid and a play on a trench in a heavy black wool.

Although her patchwork of influences left the designer much room for artistic expression, a number of Eighties-esque power suits with squared shoulders looked out of place. Same goes for the shredded sequined disco dresses, which were not as appealing as the rest of the show.