Yohji Yamamoto started his fall show in plain black, a buttoned-up shirt and skirt traced with white stitching, almost like a raw pattern. 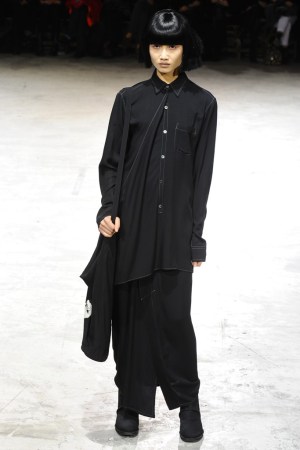 Yohji Yamamoto started his fall show in plain black, a buttoned-up shirt and skirt traced with white stitching, almost like a raw pattern, which opened the floor for a series of dark, asymmetrically sliced-up looks that would suit an edgy art student. It took a while for it to sink in that this was not a collection cut from a single Yamamoto axiom, but a variety show, one that progressed rather unpredictably and earned no demerits for it.

Unified by their blunt-cut Rei Kawakubo bobs, the models walked out in bursts of mini themes. After the arty street stuff came a group of black pieces that appeared to be covered in paper fortune-teller games. There was surprising color and symmetry in the knits — long, clingy ribbed skirts and tight sweaters in brights, such as orange, blue and purple. Up next was a pair of Annie Hall suits with bell-bottom pants and big platform shoes, followed by more loose, black tailoring.

The best of the bunch were the beautifully draped dresses constructed from intertwining pleated panels that fell into full skirts. Some were black, some done in dusty blue and brown. They channeled Yamamoto’s graceful melancholy with the help of droopy, wide-brimmed hats, but the collection was not cloaked in sadness. Rather, this felt charmingly upbeat, even a little jaunty.