The collection Hedi Slimane showed didn’t shout, whisper or even mouth the words Saint Laurent. But to do so might not be the designer’s mandate. 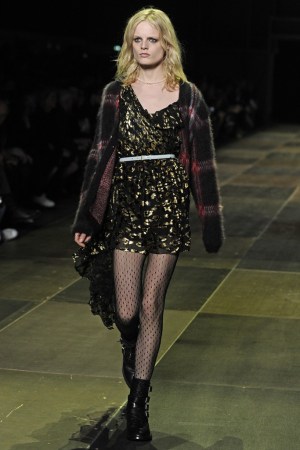 What is Hedi Slimane’s mandate at Saint Laurent? Without a clear understanding of purpose, it’s difficult to review his fall collection in a lucid way.

Typically, when a designer takes over a storied house, said mandate is, at least in part, to air out and freshen up, ditching the dated while transforming the best of the founder’s iconography into modern wonders that entice the global customer to buy the clothes, but if not the clothes, then the real moneymakers — bags, shoes, fragrance. Yet does it have to be that way? If a woman loves a dress, does she really care if she can draw a straight line back to her own mental archive of the founder’s work? Probably not.

The collection Slimane showed on Monday night didn’t shout, whisper or even mouth the words Saint Laurent. But (blasphemous though it may ring to those who worship at the YSL altar), to do so might not be the designer’s mandate. Word around Paris is that the company brass wants the collection to skew younger in look in the hopes of engaging a younger customer. Consider that done. Surely one cannot miss the ubiquity of Seventies-ish floppy hats around this city, both at the shows and elsewhere — a trend traceable to Slimane’s spring runway.

None of which explains his fall collection. Continuing from his terrific men’s collection, he worked a grunge theme, “California Grunge” to be specific. It was all about little dresses — baby dolls, high-collared schoolgirls, scoop-necked Lolitas — under the cover of big, sloppy cardigans and woolly mufflers with interludes of leather-based sexpots that swung toward biker babe. What there was, in droves: a sense of the designer’s bravado. The man has guts. In absentia: the hallowed original thought, though one is reminded of Coco Chanel’s admonition, “Only those with no memory insist on their originality.” Still, he missed the chance to take a motif well-entrenched in fashion’s public domain and make it his own.

Then there’s the issue of using expensive clothes to achieve a deliberately down-market attitude. But Slimane isn’t the first designer to elevate a bargain-bin look to luxury prices — that, too, is a fashion standard, though he could have pushed the irony of that ruse more obviously. And yes, there were clothes that the retailers who loved Slimane’s debut collection for spring will love again, notably the leather jackets, a few coats and many of the dresses, virtually all charming and some, obviously expensive, such as the last look out, an allover embroidered A-line dress with pristine white collar.

Few archetypes are more engaging than the undone girl, especially when under her ratty hair, pout, pounding gait and sloppy chic lurk a pretty face and skinny body. But is playing a cutesy, disaffected-youth hand enough to propel the house of Saint Laurent into today’s luxury stratosphere — especially if the targeted air space is that in which Chanel and Dior reside? That, too, remains a question.