The designer unleashed a blizzard of ideas that climaxed with mesmerizing cocktail dresses decorated with sheets of chain-stitched organza. 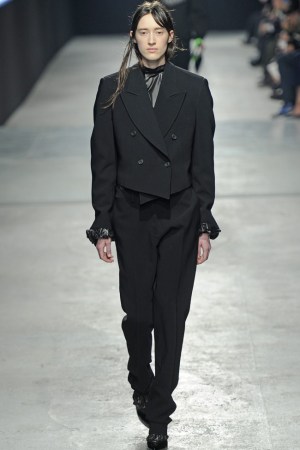 If fashion were literature, Christopher Kane would have the opposite of writer’s block. On Monday he unleashed another blizzard of ideas that climaxed with mesmerizing cocktail dresses decorated in sheets of chain-stitched organza that spilled and trembled like damp pages from an open book.

Wet-looking, featherweight nylon was a central feature of Kane’s collection, which had a dark, industrial undercurrent and was shown inside a vacant, black-painted office space. Kane did a few obvious things with the filmy fabric — e.g., thin puffer vests like the ones selling up a storm at Uniqlo — and many unheard of, including little black nylon dresses trimmed with strips of tawny mink or delicate guipure lace. They were as unexpectedly pretty as they were slyly subversive.

Ruched into whip cream-like peaks, bands of nylon trimmed myriad dresses, skirts and glossy coats. They also figured as rumpled protective covers on footwear and bags as Kane launched a complete leather goods range on the runway, gearing up for the opening of his first boutique later this year on London’s Mount Street. “Abattoir shoes,” he called them backstage before sucking back his words, given the sensitivities in England around meat and fur.

The revelation of the show was Kane’s killer tailoring, from the slouchy tuxedo that opened to the strong-shouldered, double-breasted coats dusted with crystals.

With this intricate collection, Kane made it clear that he’s scripting himself a thrilling fashion career.