As long as she’s on Peter Dundas’ watch, the Pucci woman will be swathed in Gyp-set sex appeal, even when she’s buried under a poncho. 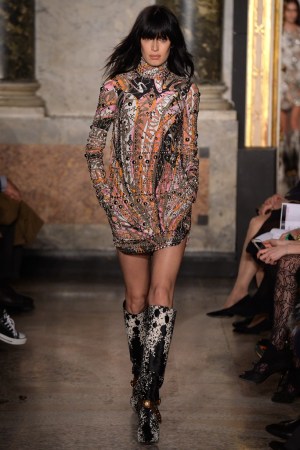 As long as she’s on Peter Dundas’ watch, the Pucci woman will be swathed in Gypset sex appeal, even when she’s buried under a giant fringed poncho in a Navajo-inspired knit pattern. Shown with brown leather pants, it was one of the more discreet looks of Dundas’ fall collection, an exercise in “savage chic,” which was code for moneyed bohemia in an earth-toned palette.

Approaching the collection from this angle is a natural fit for the Pucci ethos, and was well done. Rich fabrics used for those nice Navajo knits, along with velvet suits, thick shearling moto jackets and extreme furs, grounded Dundas’ proclivity for skimpy dresses in a vigorous sense of luxury. Some might call it excess, but Pucci has never stood for understatement.

The tribal aspect of the inspiration — show notes cited Native American and Inuit cultures — allowed Dundas to genuflect to the house prints in compelling ways, always with a Seventies tint. They came in tribal graphic geometric patterns, sometimes merged with colorful swirls and as embroideries, an elegant armor of gold and silver studs done over prints for day and on sheer tulle for the gorgeous golden goddess finale.