The designer made a statement for tailoring from the start, his first few gray looks including a mannish suit and a double-breasted coat. 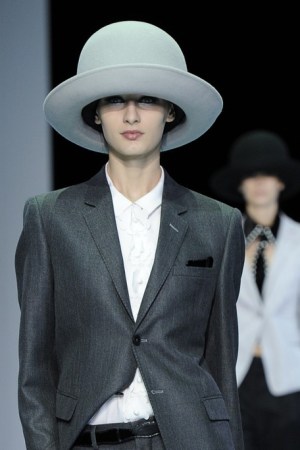 Lest there be any doubt about the purpose of Friday morning’s visit to Giorgio Armani’s Milan headquarters, the Emporio Armani show notes provided a friendly reminder. “A story about fashion,” they stated, “where masculine and feminine elements come together.”

During the press conference between his two shows, Armani elaborated that Luc Besson’s “Nikita” was an inspiration, particularly the “strong attitude, but with clothes that everyone can wear,” he said.

Armani achieved that mix with a strong lineup that largely kept eccentric proclivities in check in favor of a calmer sophistication (exaggerated bowler hats and Lucite ties were exceptions).

The designer made a statement for tailoring from the start, his first few gray looks including a mannish suit and a double-breasted coat. Both had precisely cut shoulders, though ease was the overall vibe.

He showed off a playful side with smaller details, for example, the belt-and-buckle feature at the hem of pants. They may not be for everyone, and probably served no purpose other than decoration, but Armani rendered them with enough subtlety to keep the looks light.

Evening was where the dazzle came in, quite literally. Sticking mostly to velvet as a base, he adorned several youthful cocktail dresses with glittery embellishment, and then it was pearls galore. While cropped, wide-leg pants with pearl pinstripes took the surface play a little too far, the more subdued treatments, like a trim on a lapel or single pearls dangling from a black scarf, exuded chic.