There was an artisanal element to the lineup referencing exotic locales. 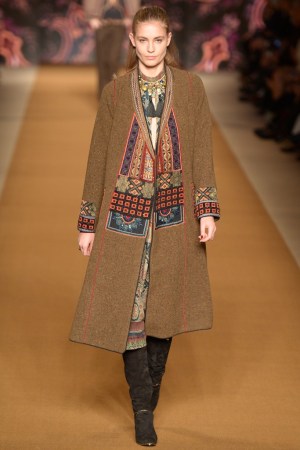 A luxurious boho vibe always works its way into Etro. It adds to the house’s charm and for fall, Veronica Etro displayed the sentiment with confidence. She cited several inspirations, from pieces of Nureyev’s personal wardrobe acquired by her father, Gimmo Etro, at auction and housed in the company archives, to “this woman traveling on the Trans-Siberian, to Samarkand on the Silk Road,” she said. “It’s a melting pot of cultures from Russia to Uzbekistan and Tajikistan.”

There was indeed an artisanal element to the lineup referencing exotic locales such as those. It came mostly via the deep, dark browns and shimmering golds, the piles of fabrics that she layered and draped, and the rich, exquisite embroidery.

Several coats and jackets, reminiscent of robes typical to Bukhara, featured elaborate stitching. Other looks were busier, such as a vest in a mix of patterns shown with a printed blouse and languid metallic skirt. The colors and textures veered to decadent — some delightfully so, others with a cumbersome feel.

There were several beautiful, pared-down numbers with mere smidgens of folklore, including a green herringbone coat with stitched detailing worn with a simple white top and slouchy green pants. These looked casual, cozy and well-suited for a long, chic journey.