The designer fused gray and black with shots of lime green. 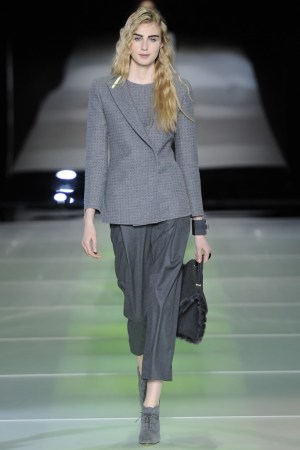 The invitation sent the message: Giorgio Armani would be going green —lime green, to be exact. But the show notes were titled, “Fade to Grey.” The combination proved Armani’s primary motif: a base of gray and black fused with shots of the acid bright. “Lime green is a color that stands out,” Armani said after his show. “It’s a stimulating color…It also represents something avant-garde.”

Perhaps so, although here Armani flexed his avant muscle with the utmost discretion. His primary approach was straightforward, his classic tailoring rendered in numerous variations. He opened strong, using different shades of gray, often in combination, for jackets, pants and dresses. He loosened his tailoring for easy coats with one-button closures at the neck.

Then the green leitmotif showed up subtly at first, as a small stripe on a jacket collar, but before long Armani incorporated it into the clothes more obviously  — the yoke of a charming black dress — or full on, in dresses and integrated separates.

Evening started with black jackets and T-shirts over fluid green pajama pants, some of them crystal-embroidered. The mood here was casual, sometimes too much so, as in just-pulled-the-black-top-out-of-the-closet casual. But it picked up with pretty gowns, some cut with interesting bodice treatments. These came in gray and black with varying degrees of lime. At highest color intensity, they had a certain bravado. Come Oscar night, will someone dare?