Frida Giannini sent out a strong lineup rooted in sportswear and infused with a Sixties vibe à la Julie Christie. 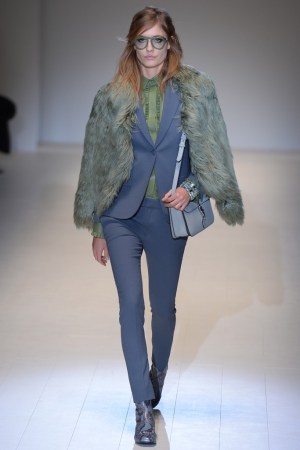 “I felt the need to materialize the essence of Gucci,” Frida Giannini wrote in her program notes. If one infers from her words a moment of reevaluation, it proved worthwhile, as here was a smart, savvy Gucci collection. For one thing, Giannini seemed to have asked herself, What does the Gucci woman, whom she characterized as someone who “dresses to please herself rather than others,” want and need to wear?

The answer, plain and simple: real clothes that deliver functional chic — and, of course, a hefty dose of the essential house glamour.

Giannini obliged with a strong lineup rooted in sportswear and infused with a Sixties vibe à la Julie Christie. That translated into updates on the crisp, precise shapes of that era (there was a huge emphasis on outerwear) softened in Giannini’s palette of nonsaccharine pastels — cosmetic pinks and beiges; dusty blues and greens. She favored lean, mannish tailoring for jackets and pants, often contrasting their linear line with inviting outerwear in shaggy, colorful incarnations. Case in point, a frothy mass of curly blue shearling worn over slim pants.

Dresses and belted coats retained the clean shapes while expressing the more feminine side of the Gucci range. These often incorporated elements of leather, whether as the bodice of a silk cady-skirted dress or as a plastron on a pink wool coat. As for accessories, the newly unstructured bags were sometimes matched to the clothes, as with a big pink tote and a racy jacket. And it was all worn with sensible-heel, horse-bit boots.

Evening proved something of a surprise with nary an obvious Oscar dress in sight. Rather, Giannini offered a series of short, structured dresses including several in leather, their bodices decorated with bold encrustations of crystals. These had an oh-so-subtle touch of the latter-day warrior woman to them. The Gucci woman may be relaxed for fall, but she’s fierce at heart.