His labor-intensive clothes command attention, and his fascination with surface decoration and optical effects was on full display for fall. 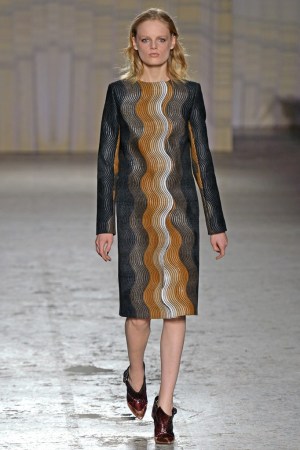 Marco de Vincenzo’s new partnership with LVMH Moët Hennessy Louis Vuitton is sure to intensify the spotlight aimed at this young Roman designer, whose show on Sunday drew an impressive turnout of top editors and retail executives.

His labor-intensive clothes command attention, and his fascination with surface decoration and optical effects was on full display for fall. Rainbow-shaded Lurex winked out from small portholes punched into sailor coats, or flashed from pleated panels carved into the sides of trim coats and shift dresses.

Panels of color glimmered between the tight ribs of clinging black knits — a nifty effect akin to Northern Lights. Similarly, circles embroidered with coppery threads took on a 3-D aspect on a black velvet bustier dress and sweatshirt-simple top.

While there were a few too many black coats with swirling embellishments reminiscent of Pierre Soulages paintings, the show climaxed with a flurry of pin-dot Swarovski crystal lined up on simple tunics, T-shirts and skirts. They had a liquid effect that was dazzling.