For fall Consuelo Castiglioni unleashed a fashion extravaganza as audacious and over-the-top as it was beautiful. 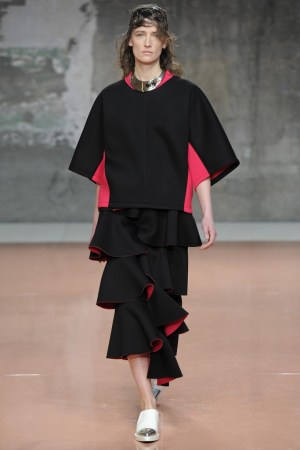 After two seasons of tempering the artist within so as to highlight her more commercial proclivities (which proved considerable) at Marni, for fall Consuelo Castiglioni unleashed a fashion extravaganza as audacious and over-the-top as it was beautiful. “Amplification, exaggeration, gentle distortion,” she wrote in her program notes.

That translated into an eccentric amalgamation: architectural meets tribal meets athletic, while nodding toward Japan and making chic mockery of a few Eighties tropes along the way. Complicated? Indeed, and deftly executed as Castiglioni worked a potentially volatile cocktail of demonstrative silhouette, unfussy fabric and artisanal craft that pushed the limits of sartorial sanity. It looked great.

An underlying sturdiness unified the collection’s many ideas. One moment Castiglioni encased the body in big Neoprene tiers and the next, a send-up of the tailored lady suit in hot pink with the focus on her new shoulder — the seam dropped severely to mid-upper arm for a modernist riff on a lantern sleeve. Lean parkas got enormous fur hoods unzipped to cover the entire back; abstract prints by artist Magnus Plessen emboldened otherwise gentle silk dresses, and abundant furs flaunted thick, notice-me vertical stripes. Throughout, Castiglioni seemed to be testing ways to define the waist: a dense ruffle dropping down from under the arc of a cropped sweater; an external bustier in army green with cartoon white piping over a chunky sweater; some good old-fashioned stretchy cinch belts. She closed with pastiches of, among other textures, furs, feathers and felts that looked wonderfully preposterous yet utterly controlled.

This was a powerful show — a sheer pleasure to look at (unless you’re a strict minimalist who can’t handle an extra button) and one that made you think. What is the role of the modern runway? Are such demonstrative clothes show-only? And, despite instant access and mainstream obsession with all things fashion, is there still a thriving niche called insider fashion? Provocative stuff.