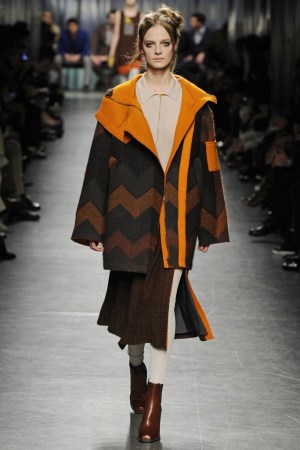 “A very feminine girl in men’s oversize outerwear” is how Angela Missoni, backstage preshow, described fall. Indeed, some of the silhouettes reflected such a vibe, but that wasn’t the collection’s main takeaway. Rather, it was the innovative ways in which the designer worked her textures, mostly via pieces that read woven but were actually knits.

Cases in point: tailored coats rendered in an intarsia loop stitch and a chic pencil skirt in a tweed knit. Missoni played on this idea throughout, reinventing the house’s core category in interesting new ways. She also offered novel interpretations of Missoni’s signature zigzag: in brown and orange, for example, amplified on a mohair-and-wool coat and on a wrap skirt, the latter shown with a rusty brown tank top and burnt-orange sleeveless padded cardigan, its stitching mimicking the pattern. But when done in dark and drab hues, they lacked a certain exuberance. The chevrons would look better in a light, shimmery yarn.

Missoni’s outerwear was strong, with coats, cabans and parkas that demonstrated confidence and ease. The furs and fur details on knit numbers — as in the gray wool-and-mohair one with an orange astrakhan collar and yellow cuffs and pocket flaps — exuded a particular chic. The final exit was a brown astrakhan jacket sliced with electric blue lines, worn with tweed cargo pants. It was sporty and boyish, and, on Joan Smalls, still coolly feminine.