For his runway debut at the house that the late Franco Moschino built, Jeremy Scott held nothing back. 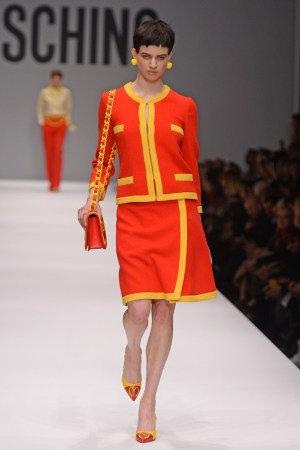 Jeremy Scott is all thumbs — 10 thumbs to stick in the eye of the fashion establishment, that is. He even started his show nearly an hour late for tardy Katy Perry. The loud boos that greeted her arrival eventually yielded to a few cheers.

For his runway debut at the house that the late Franco Moschino built, the Missouri-born designer held nothing back, kicking off with a silly series that riffed on McDonald’s with a french fries-inspired mink bathrobe coat, a four-pocket jacket bearing the slogan “Over 20 million served” and a chain-handle bag carried out on a brown plastic tray.

There were references galore to the Rue Cambon, including quilted leather suits heaving with gold chains, and even more recent designs, like a white logo shopping bag done up in fine leather. It’s par for the course at Moschino but amplified by Scott, who appropriates and sends up consumer culture like a kid in a candy store. (And yes, there were gummy bear dresses, but more on the finale later.)

Massimo Ferretti, chairman of Moschino’s parent company, Aeffe SpA, has said the designer change was necessary as “every now and again, fashion needs to be renovated and shaken, just as Franco did in the Eighties.”

The crowd certainly lapped it up, from the SpongeBob SquarePants sweaters and leather goods to Scott’s take on slogan chic: a sleek mink coat with “Fur Real” in intarsia and a white leather suit with black splotches reading “Cash Cow.”

Couched amidst the runway theatrics was some commercial merch, including bow blouses in butter yellow, cute black cocktail dresses and a leather parka with internal backpack straps. But leave that to the showroom.

On the Milan stage, with Perry grinning in the front row, Scott just wanted to have fun. The show culminated with a parade of tongue-in-cheek “couture” gowns in prints inspired by food packaging. It reached a zenith with his blue-and-orange “Cheezy Bits” number whose fine print, scrolled out on the hem, exclaimed, “made with a lot of artificial flavors.”