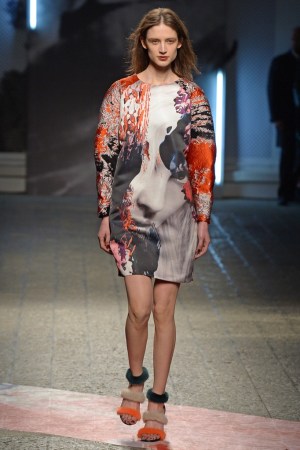 “There’s more to life than this,” read the words emblazoned across the sleeves of a sweatshirt at the close of the MSGM show. Massimo Giorgetti was ostensibly referencing a song by Bjork, one of his muses for fall, but he could just as easily have been talking about the fashion whirlwind.

One of Milan’s rising design talents, Giorgetti this season attempted to evolve MSGM without losing the youthful effervescence that has made the brand a hit.

The novelty came in the fact that both patterns and plain fabrics were worn head to toe. “MSGM is known for its mix-and-match,” Giorgetti said backstage. “This time, I wanted to show more total looks. It’s a little more grown-up, a little less girlish.”

The lineup reflected that transition, with some awkward skirt-over-pants combos teetering between teen and adult, and some of the looks owed more than a passing debt to Dries Van Noten. Still, Giorgetti’s flair for pattern and color should safely guide him to the next phase.