“Real life with a touch of magic” was how Alessandro Dell’Acqua summed up the spirit of his fall collection. 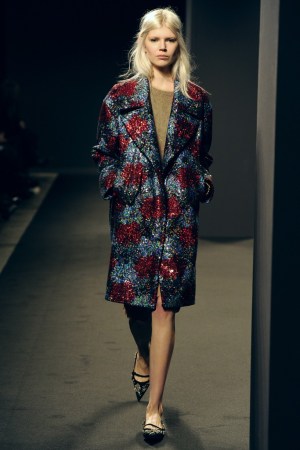 “Real life with a touch of magic.” That was how Alessandro Dell’Acqua summed up the spirit of his fall collection for No. 21 in his show notes. The thought translated into a new spin on the designer’s trademark mix of masculine tailoring with high-octane evening sparkle.

Dense holographic sequins were a focal point but they were deployed almost nonchalantly, such as with an oversize chocolatey-brown polo shirtdress glimmering in thousands of those sparkly bits.

Even more exuberant was a glittery pattern of red roses on a blue background that appeared on several looks. But Dell’Acqua grounded the shine via neutral pairings like drop-crotch pants in a fluffy, camel wool with sequined polo top.

In return, boyish topcoats were given an unexpected twist with panels of thick fur and, sometimes, cabochon embroideries in back. With this collection, Dell’Acqua proved that there’s no need to choose between comfort and elegance.