The show was marked by a casual, rugged flamboyance that felt at once grounded, sensual and eccentric. 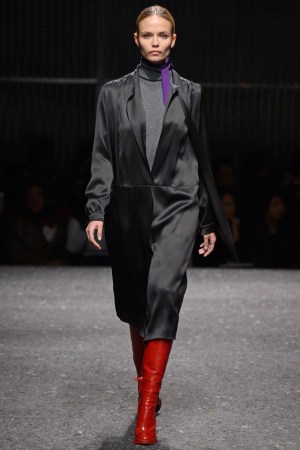 Listen. Are those the dissonant musical strains of German avant-garde theater, or the sound of Miuccia Prada “on trend”?

“Act 2,” Prada’s small black invitation beckoned discreetly. She thus gave notice that, unlike spring’s remarkable high-intensity portrait session, this show would connect back to her recent men’s collection with references (by her own admission vague) to German avant-garde culture as indicated by the music: selections of Kurt Weill performed live, and on the soundtrack, Barbara Sukowa, who starred as the chanteuse-prostitute in Rainer Werner Fassbinder’s “Lola.” The set was held over exactly from men’s: an austere gray industrial stage surrounded by metal scaffolding. The musicians occupied several pits while the models negotiated the surrounding elevated walkways.

As for that vague connection to the clothes themselves, a Google reminder turned up “Lola” stills in highly saturated tones, some featuring Sukowa in racy regalia as befit her character’s dual career. Color and sheer — Prada showed plenty of both. And there was a distinct Constructivist mood to the prints. Otherwise, this show was marked by a casual, rugged flamboyance that felt at once grounded (as in real-clothes grounded, particularly the outerwear), sensual and eccentric. “I really went bold. I liked this theme.” She offered that simple assessment post-show before voicing headier concepts: “It’s about humanity, it’s about people, feelings, emotion. I wanted to try to transmit that kind of humanity and that kind of thinking.”

Prada opened with a perfect simple black shirtdress over a gray turtleneck, perhaps a teaser antidote to spring’s divine excess. Yet those thus set up for a minimalist parade had been deceived. She followed with dark, mannish coats, their contrast piping reminiscent of school uniforms, only they weren’t over trousers or pleated skirts but loose, sheer shifts. Then the coats got bolder, an explosion of color, first in trims — wide, fleecy outlines on gray wools — and eventually in an array of shearlings in intense combinations of yellows, reds and purples. This is where Prada was both on and beyond trend: in a major outerwear season, she was obsessed and even practical. At the same time, her lineup retained every bit of the drama and fashion importance we’ve come to expect.

As did the show overall. Part of Prada’s fascination lies in her ability to make the apparently dowdy sensual; one can only imagine what races the heart of the stern girl in a baggy chevron V-neck and prim, high-necked precision-print shirtdress. Conversely, Prada’s modernist update on Lola in sheer sack dresses suspended from metallic strips and decorated with bits of long-hair shearling worked the arty side of the seductress range.

Complicated? At first glance yes, and boldly so. But underneath the flash this was Prada at her — dare we say it — commercial best.