The center of his set was a ring of fire — live flames lit in a circle — that ignited at the start of the show and remained burning for its duration. 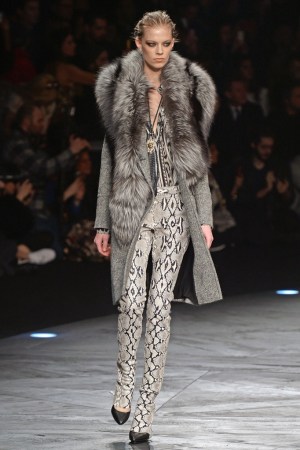 Is Roberto Cavalli the devil? It’s a reasonable question after he made the age-old joke of fashion-week hell as literal as possible with his fall collection. The center of his set was a ring of fire — live flames lit in a circle — that ignited at the start of the show and remained burning for its duration. Anyone who didn’t immediately note the nearest exit had more faith in the Cavalli production team than we did.

With roughly 1,200 people jammed into extremely cramped quarters, the pitch-black tent already felt like a fire hazard by fashion-show mind-if-I-sit-on-your-lap standards, and that was before they lit up the place. Surrounding the blaze with a shallow pool of water did little to dampen the fact that with stifling heat and noxious fumes, the spectacle felt like a genuine safety violation.

A spokesperson for Cavalli told WWD that the special effects were handled by strictly regulated professionals and “all the necessary permits and security measures, including the amount of fire marshals and fire extinguishers required by law and calculated according to number of egresses, etc.” Also, the flame was produced by a nontoxic gel.

No, the place did not go up in smoke — thank God. But for what? To backlight Cavalli’s parade of snakeskin getups and flapper dresses that came in shredded leather and fur skirts? Allowing the clothes to distract from the inferno scene for a moment, one found that the collection was one of Cavalli’s recent best. But even the most seductive gown and sultriest fur couldn’t compete with the sight of the door.