The designer is carving out a niche with her inclination toward diverse cultural influences and strong prints. 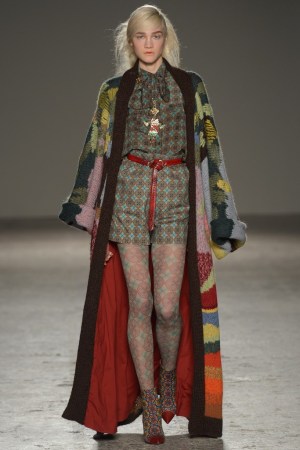 A hot young name on the Milan schedule, Stella Jean is carving out a niche with her inclination toward diverse cultural influences and strong prints. She made the point again for fall, delightfully so, though some of the looks could have used more restraint.

Jean riffed on Kabuki theater with African touches — or, as she put it in the show notes, a “geisha and mannish attitude.” Silhouettes ranged from obi-belted kimono dresses, dirndl skirts and strong tailored jackets to boldly patterned robes. One such style was casually worn over an ensemble of shirt, shorts, tights and shoes, each in a variation of the same medallion pattern. This made for one heady cocktail. Other motifs such as carp fish, flowers and masculine checks added to that notion.

Jean’s aesthetic worked better when she showed the busier pieces with a solid — or at least, something quieter. An orange wax-printed jacket shown with a blue men’s shirt and burgundy pencil skirt exuded less whimsy and more womanly chic.