The collection Donatella Versace showed made a marked departure from her usual razzle-dazzle. 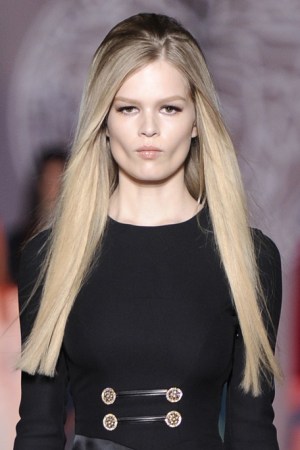 A Versace collection plain? While that word overstates the house’s newfound understatement, the collection Donatella Versace showed on Friday night made a marked departure from her usual razzle-dazzle. “I focused on proportion and cut rather than embellishment,” Versace said during a preview. Indeed she did, and there were plenty of lovely clothes. Still, the overall mood was, by Versace standards, a little unsettling.

In a sense, her resolve was bold. The Versace aesthetic is one of the most razor-sharp in fashion, easy to identify and to lampoon, and perhaps for those reasons, difficult to evolve. The Versace glamour girl is one of the great archetypes of fashion, a paragon of high-polish, high-voltage, high-energy sex appeal.

Yet here she was in long-sleeved bias-cut dresses, some crafted from two different fabrics for contrasts of texture (silk cady and satin) or color (red and blue). Make no mistake, it was still plenty sexy. Some of the dresses had strategic slashes, and when Versace switched to tailored mode, she kept the proportion ultrasleek. Military touches — big, gold buttons and chain-fringed epaulets — provided some flourish, while the footwear delivered the most intense decoration: boots flaunting intricate cutwork and elaborate chain-design insets.
Versace gave in to some of her innate flamboyance with intarsia furs and a few jeweled cocktail dresses but came back full circle for evening — gowns with nary a crystal in sight. Overall her move toward restraint was admirable if as-yet unresolved.