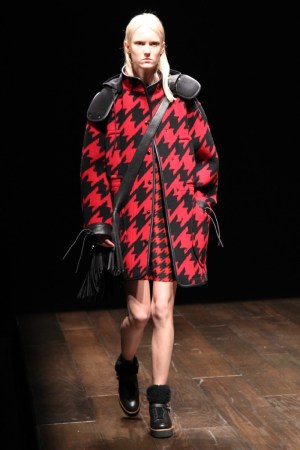 With its graphic installation display and Joel Sternfeld’s giant photo of an Oregon street from 1979 as the backdrop to a small runway show, Coach’s level of presentation — its first during fashion week — was a strong debut for Stuart Vevers.

The designer worked traditional American sportswear with a fresh perspective. “If there’s a familiarity, people can connect,” he said. The designer placed as much emphasis on outerwear as he did bags and shoes, looking at fall through a distinct Americana lens with cinematic references like “The Shining” and “Badlands.” Vevers rendered coats — many of them oversize in blanketlike wool, twill, leather and furry sheepskin — with a subtle utilitarian, workwear vibe that was best captured with the toggle numbers.

Some of the chicest skirts came with round hems and hardware. One, for instance, was covered in grommets and paired with a leather moto jacket and a polka-dot, tie-collar shirt. It all worked well with the accessories, which included cross-body shearling bags, whipstitch fringe styles and shearling-lined wedge boots and platform sneakers.

Vevers’ mandate was to reinvent Coach for a new generation. This impressive effort added a fashiony sensibility to the clothes — which might be just what the brand needed.