Now in its ninth season, the brand is publicizing its national fashion culture to the world. 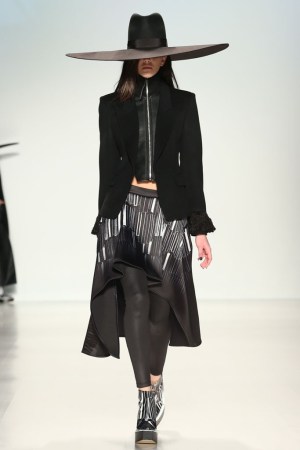 Now in its ninth season, Concept Korea is publicizing its national fashion culture to the world.

This season, the show began with an interpretive dance that was artful and entertaining, and a spotlight on four designers followed. Kaal E. Suktae by Lee Suk Tae was first down the runway, inspired by modern grunge and translated into cool leather outerwear and graphic graded prints. Choiboko by Choiboko showed an interesting collection filled with great abstract-print coats.

Beyond Closet by Ko Tae Yong, a men’s collection, harked back to the designer’s time in the army, and as such featured a camouflage-print suit and some great military-inspired outerwear. The last to show was Big Park by Park Youn Soo, who showed a whimsical collection filled with tabletop motifs.