The designer celebrated her milestone on the runway with several bold statements. 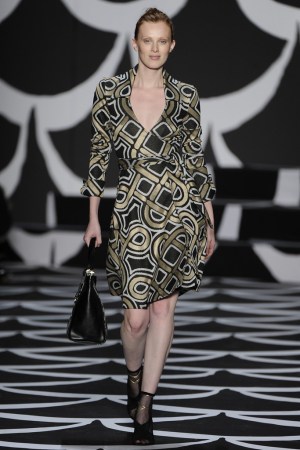 It’s been exactly 40 years since a seductive Belgian with a big name and even bigger dreams turned the bathrobe on its head and created the jersey wrap dress. The style became an instant hit and a staple in the working woman’s wardrobe, transforming Diane von Furstenberg from a European princess into one of fashion’s biggest names.

Much has changed sartorially since then but the designer has been able reinvent the wrap for a new generation, most recently gaining currency again via Amy Adams’ character in “American Hustle.”

On Sunday evening, von Furstenberg celebrated her milestone on the runway with several bold statements, from the new venue choice, Spring Studios, to a live performance by St. Vincent and fall clothes that featured, of course, plenty of variations on the wrap. The designer even reminded everyone that she has yet to exhaust the puns: “Bohemian Wrapsody” was the name of this collection.

Von Furstenberg made her point from the first few exits. Karen Elson opened in a gold jacquard version and was followed by Karlie Kloss in a similar design, this one over flared pants and under a wave-patterned jacquard coat. The riffs on the wrap continued: here, a printed blouse; there, a languid dress with plunging neckline. Classic versions included a black number, its skirt printed and slightly voluminous.

But von Furstenberg’s standouts were actually those free of drapery. There were several striking coats including a cloud-jacquard cocoon one shown with a patterned sweater dress. A speckled fur looked chicly whimsical.

The show ended with an all-gold finale with the designer comfortably showered in a flurry of matching confetti and applause.