For this career-and-life milestone, Karan was in full-on city mode, sensual, urbane, focused. 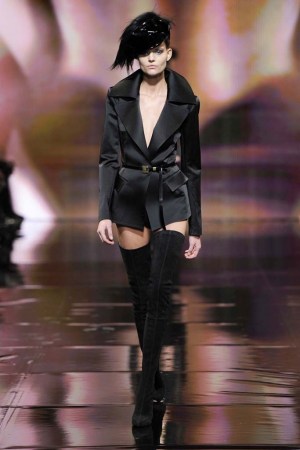 Donna Karan was emotional as she took her runway bow. She was no doubt thinking about the 30 years that had brought her to this point, the ups and downs, about her late husband Stephan Weiss. She also thought about the stress of the past 24 hours during which a series of mishaps, horrible lighting test included, had her “freaking out.”

Karan should also have thought, “God, I just staged a beauty!” Indeed she had. For this career-and-life milestone, Karan was in full-on city mode, sensual, urbane, focused. “I was so clear in what I wanted to say,” she said after the show. “I wanted to show the strength of the woman. I wanted to show that after 30 years I think we stand for something that is absolutely, iconically Donna Karan. I wanted it to be a reflection of the past, and the present coming into the future. I wanted it to be about art, the city, the body, movement, the strength of tailoring, evening.”

Before the show, Karan screened a film she commissioned by Steven Sebring that was all blurred images of bodies in motion, mesmerizing and elegant. Then came the show, opening with three versions of her original building block — the body — now rendered as body jacket and body shirt as well as bodysuit. These were worn with over-the-knee suede boots and night porter caps frothed with dollops of long-hair shearling, giving the models the air of showgirls at a decadent yet refined nightclub. They set the stage for a parade of the Best of Donna, by which we mean less retrospective (though there were elements) than Donna at her best, not letting earnest crossover from her sojourns get the better of her homegrown chic. She contrasted light-as-air chiffon against substantial jackets and coats, some with artisanal elements — hand-punched patterns; graphic gold embroidery. This motif repeated again and again, varied by the shape and material of the toppers and the exquisite decorative flourish of the underpinnings. Among the coat options: sleek cashmeres, flamboyant long-hair shearlings and a genuinely sophisticated puffer.

Evening rocked, particularly those gowns with fluid, translucent skirts that wafted provocatively over bodysuits and bare legs. Some were beaded in celebration of New York’s night sky. “I have the honor of looking at the city lights from my apartment every night,” Karan said. “This place is so, so beautiful, and I wanted to capture that.” Done. And dazzling.