The designer's fall collection played to women with panache and charm. 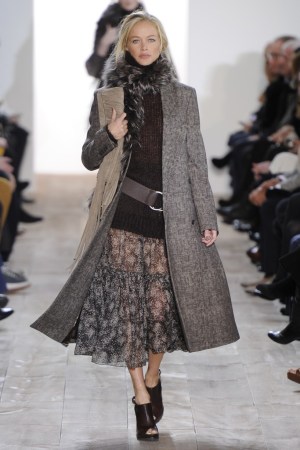 Real women, those who sometimes feel disenfranchised by the fashion runway and its editorial ways, have a champion in Blake Lively’s bosom. As Lively sat at Michael Kors in a V-neck-to-there look from the designer’s spring collection, she and her ample assets stood for something (other than giving the straight photographers something to really get excited about; they may have enjoyed the “Wall Street” escapades of Michael Douglas, also front-row, but really).

Kors designs clothes for real women with real lives and real wardrobe preferences. These women take care of their bodies and prefer a little sexy with their fashion, thank you, just like Blake. If she makes for an aspirational Everywoman, so, too, do the gorgeous thirtysomethings Carolyn Murphy, Frankie Rayder and Karen Elson, all of whom walked the show. But this is fashion, not social work. The point is that Kors is happy to go public with his love for women with real bodies (albeit well-toned), women in their 30s, 40s and beyond (you know, the kind who buy expensive clothes). He knows that most of those women would rather look mainstream glamorous than stop-traffic-on-the-FDR-(literally)-so-the-street-photographers-can-shoot-me-in-my-wacky-coat fashiony.

The collection Kors showed on Wednesday played to those women with panache and charm. It opened with an orchestral version of “California Dreaming.” “I love a hybrid,” Kors said during a preview. “Basically we wanted to take everything that you think of as New York — the polish, the vanity of it — and view it with this northern California easiness, a mix of the two. I guess she’s an urbane gypsy.”

Perhaps so, although one wonders what that West Coast free spirit would think of Kors’ liberal use of fur (don’t you just love a fashion oxymoron?). Otherwise, these clothes should resonate beautifully with women the world over, delivering Kors’ desired casual chic to near perfection. To that end, the silhouettes were almost invariably relaxed and rooted in traditional notions of sportswear — a great coat over a sweater and chiffon skirt; a chunky hand-knit over a fringed suede skirt. Plays of texture were key — thick sweater knits, mannish tweeds, flannels, python, sequins, chiffon, fil coupé — worn in the most inviting of combinations. Throughout, the sensuality derived from deft use of transparent fabrics.

About those furs — Kors had always been a fan. Here, he upped the ante considerably, perhaps influenced by this brutal winter, or maybe, his ever-escalating wealth — who knows? Whatever the reason, they were fabulous, particularly in casual mode: chocolate sable coat tossed over denim; mink popover popped over sweats. Because a chill in the air is no excuse for turning down the temperature on style.