Susanne Ostwald and Ingvar Helgason cited several inspirations in their fall show notes, among them Germany and Iceland mixed with modern Americana. 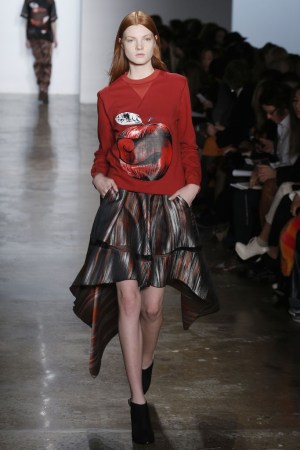 Susanne Ostwald and Ingvar Helgason cited several inspirations in their fall show notes, among them Germany and Iceland mixed with modern Americana, not to mention Anselm Kiefer, Joseph Beuys, Andy Warhol, Roy Lichtenstein and Tim Burton’s 1989 “Batman.” Not surprisingly, the collection went in many directions.

There was a whimsical element in the sweatshirts and football jerseys done in apple or banana motifs, some shown with asymmetric handkerchief skirts. A few of those fruity numbers came half-peeled, a piece of fabric sliced off and dangling from the garment as if ready to eat.

The designers fared better with their more sophisticated looks, including a cinched furry coat over a linear skirt and the formfitting polo shirtdresses done in a twig motif. While these looks had a cool, noirish quality, they had little to do with the rest of the lineup.