Dao-Yi Chow and Maxwell Osborne rode their momentum into the women’s arena for the first time this season. 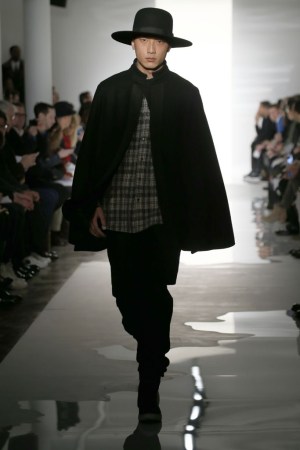 Fresh from their Swarovski and CFDA/Vogue Fashion Fund wins for best men’s wear designer, Public School’s Dao-Yi Chow and Maxwell Osborne rode their momentum into the women’s arena for the first time this season. They combined both collections into one runway show — also a first after several seasons of presentation formats.

The crux of the men’s lineup, which looked more grown-up and sophisticated than in the past, was about “turning old men’s wear patterns on their head,” said Chow. A clear example: a tweed biker jacket with leather sleeve inserts paired with wool tuxedo pants with faille side inserts.

Adapting their aesthetic to the feminine form did not seem to be a stretch for Chow and Osborne. Dressed in lean tailoring and slouchy layers, the Public School girl is the cool, androgynous fraternal twin to its guy. The designers broadened the palette for her, working in deep bordeaux on an elegant cape, for example, and softened the lines with chunky knits. The fits were spot on — especially the hip-slung shorts and pants — and the total look was interesting, if familiar.

No longer an up-and-coming designer brand, Public School appears to be moving into the big leagues.