Audacious calm — now there’s a sartorial oxymoron. Yet audacious calm is exactly what Mary-Kate and Ashley Olsen delivered in their fall collection. 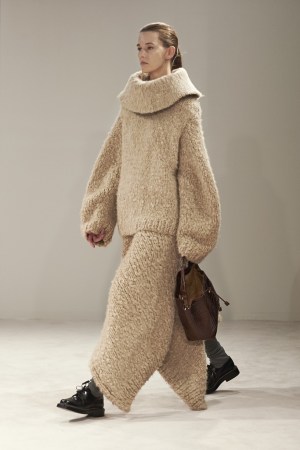 Audacious calm — now there’s a sartorial oxymoron. Yet audacious calm is exactly what Mary-Kate and Ashley Olsen delivered in their fall collection for The Row. In so doing, they wreaked sly — and chic — havoc with the concept of discretion, and it looked great.

The designers built The Row on a savvy, beautifully executed platform of quiet luxe. Yet in the last few seasons they’ve introduced small elements of embellishment — macramés; embroideries; tony, jeweled buttons. Here, they shunned any trace of superfluous decoration, instead speaking volumes — literally — with cut and proportion. “We played a lot with shapes,” Mary-Kate said backstage. “The fabrics started with the double-face cashmere, about 900 grams. We really worked on [the cut] — circles, squares and how we played with collars.”

They opened with a pair of giant sweaters, one beige, one gray, in “fur cashmere,” worn over matching capes worn as skirts. Their abundant size and meaty texture pushed the notion of “cozy” to the extreme. Then came an array of coats and capes, most cut for unfettered, even dramatic, movement, though one or two were of a more trimly tailored variety. These were worn over dresses and skirts in various textures of wool and mohair with collar treatments bold enough to deliver a bit of graphic oomph.

There was more than a little hauteur to the demonstrative, even daring, proportions and to the derby brogues handmade by Enzo Bonafè — serene, sensible elan for supremely secure women. To that end, one felt a twinge of Perry Ellis, an inspiration well used by the young designing partners who take chances in off-beat ways. The girls have guts.